Over the past couple of months, we started reading Touching Spirit Bear by Ben Mikaelson to study the Youth Criminal Justice act of Canada. It touched upon the restorative justice system used in the YCJA, and here are my thoughts on the healing circle presented in the book.

If I were in the healing circle, I would definitely take into account Cole's history (not only criminal history but family history as well). An important factor in any person's life is his or her family and how their family treats them. For example, if your father beats you and your mother is an alcoholic, you probably won't have a good role model to grow off of. Without proper guidance in life, one is likely to stray off the 'good' path. I understand that Cole is who he is because of his family. If he had a good family that cared for him, he mightn't have committed so many (or non at all) crimes. I don't think that Cole should take all the blame for the crimes he committed. His family takes some blame as well, since none of them were there to guide him or help him. The YCJA is focused on reparative and restorative justice, and I think that is just what Cole needs.
Posted by Tong at 13:25 1 comment: 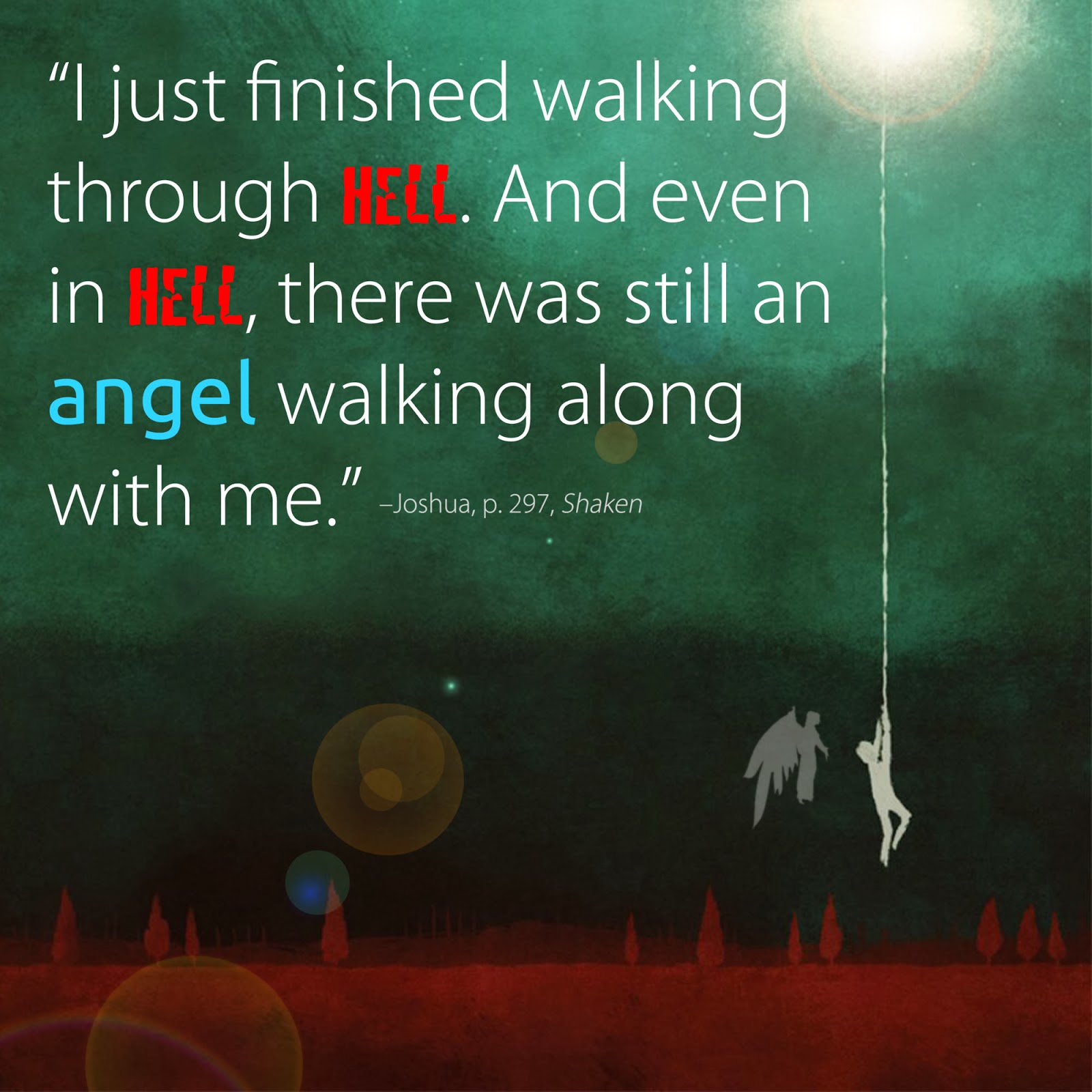 This quote is from the book Shaken, on the last page when Joshua leaves his father to be evacuated back to Canada from the earthquake. The quote is a metaphor, and refers to Philippe who kept Joshua and Naomi safe while they were traveling to the embassy. I think that this quote has many connections to real life, as even in the worst scenarios and the most difficult of challenges, there is always hope to guide you to success. In this case, I think that hope is represented by Philippe. Hell is the aftermath of the earthquake, and the angel is hope. The background has a person holding onto a piece of rope that comes from the "light", while descending into "hell", which is represented by the red ground and red trees. The whole piece is abstract so that you can imagine more than you can see.
Posted by Tong at 09:16 No comments:

Today, I was assigned to write a small piece in the first person as a character from my GINS novel. In this case, I'm writing from the perspective of Phillipe, before he found the orphanage.

Today, I have to go outside to scavenge for food again. Food supplies have been relatively high this year, but now I’m running out again because I foolishly decided to eat everything I had left (which wasn’t much, but included a moldy piece of bread, half a rotten apple, a couple of stale wheat wraps) to go along with the prized meatballs I found yesterday while sifting through the garbage. Water here is also a big problem, since it’s very hot, and you get thirsty quite a lot during the day. Drinking from a stream or river you find nearby can be life-threateningly dangerous, since other people put their waste into the river. I don’t usually drink from there unless I’m literally going to die of thirst. I have a couple of old plastic jugs that I use to collect water, but they’re all empty now because the moldy bread and stale wraps were literally crumbling away, and a lot of water was necessary to keep my parched mouth wet. I seriously regret binge eating yesterday, so I’m going to have to sift through some more trashcans and maybe head to the orphanage to get some food for today. Here in Haiti, surviving through the day is a challenge every day. You’ve got thieves, murderers and the mentally insane, and basically everyone to worry about, and you don’t know when they’ll strike. After getting food at the orphanage, I’m going to have to find some clothes to replace the stringy knots that are all that remain of my previous shirt and pants. Here, clean clothes are a precious commodity that are rarely seen anywhere. Most of the stuff you can barter for or find on the streets are already dirty and stained, if not worse. In fact, pretty much everything you find here is dirty and stained. The furniture, clothes, food, they all exhibit some form of wear and tear, since buying new stuff is difficult for most people who have jobs since their salary is so low, and virtually impossible for people like me who wander the streets all day looking for stuff to salvage.
Posted by Tong at 13:29 No comments:

The World-Wide Charter of Rights and Freedoms

Process in making this Charter:

We started with what we thought would be the ideal society. It should be fair, it should be modern (in that it takes into account the 21st century) and it should be realistic. I think that the Internet should've been a right because Finland has that right. The Charter we have created is showing what we think should be implemented into a world wide Charter of Rights and Freedoms like the one Canada has. This Charter is a combination of what we have learned and what we could see change in today’s modern world. I think that these rights should be available to everybody in the univers
Posted by Tong at 09:06 1 comment:

We just studied the Canadian Charter of Rights and Freedoms. In my GINS novel, Shaken, in Haiti, there is a similar constitution called the Constitution of Haiti. This constitution guarantees freedom of press and speech, although there is nothing mentioned about discrimination. Lawyers are given immunity, but because of the corruption, these lawyers are bribed, threatened or killed. In fact, husbands are allowed to murder their wives if they are found dating another man!

If the Canadian Charter applied in Haiti, the legal rights would definitely benefit the lawyers and the rate of crime would go down. In Canada, legal rights make torture and physical punishment illegal. In Haiti, since torture is used regularly to stop witnesses and lawyers from appearing in court. The crime rate would go down because witnesses could testify more. Another thing that the Constitution of Haiti lacked is a section detailing mobility rights. In Canada, you're allowed to move anywhere in Canada you want and make a living there. In Haiti, basically 90% of the population is in poverty, and they can't earn a living there. If the Canadian Charter is applied to Haiti, then there would be way less poverty as everyone would be able to earn a living.

Today I'm going to talk about the connection between consumerism/economic systems with the book that I am reading (here).

So, in Shaken, which takes place in Haiti, there really is no system to buy goods/services. It's pretty much every man for himself out there, and many common things that you have in your house/you can buy at a grocery store are rare there because of the issue of poverty in Haiti. Obviously, if you come across a poor country/state, you don't expect a Walmart or a McDonalds, but since Haiti is located in North America, you would definitely expect some of the influence of the US/South America to rub of on them. Instead, because of the location of Haiti (on 2 different seismic faults) and because of how Haiti was formed as a country, the economic system started out poorly. This was also exacerbated in the 2010 earthquake, which damaged a lot of infrastructure originally used for the economic system. Add in the fact that the politics in the area were unstable, and the fact that the government adopted many bad policies, and then you've got a barely functioning (if at all) economy.

Well, that's it for this post, thanks for reading!
Posted by Tong at 15:53 No comments:

This is the second roundtable for the GINS project, with 2 other kids.

Me and 3 other kids (Phil, Isaac, Jared) recorded a roundtable discussion on our books so far.
Posted by Tong at 13:34 No comments:

This is my first post on the Global Issues Novel Study project. For this project I decided to read Shaken by Eric Walters. These are my thoughts on the first 70 pages of the novel. For those of you not familiar with this book, it's about the 2010 Haiti earthquake. The book is historical fiction, which means that the book is set in the past, with actual events and environments, but the main character(s) tend to be fictional. The main issue that's being addressed is poverty and earthquakes in poor areas, but in the first 70 pages, only poverty is addressed. I chose this novel because I really think I connect with this issue. Earthquakes have impacted me deeply, because one of my friends in China lived in the Sichuan province and was affected by the earthquake there in April of this year. I already know that Haiti is the poorest country in North America, that it's in Central America and that it is French. I have a few questions that I thought of when I started the novel.

I wonder if the author has actually been to Haiti...
Did the author piece the info together from information online/in books or did he actually visit the airport?
Why did Joshua's mother have to die?
How come there's no snow outside when its in January/December?

And finally, the characters so far:

Joshua - A church kid who's dad is a priest
Naomi - A girl with diabetes
Joshua's Dad - a Minister/Priest guy
Iris - The wanna-be girlfriend of his dad
Posted by Tong at 08:37 No comments:

Anyways, my quote is:

I found this quote after reading the entire series about 3 times. I think that this quote holds true for basically anything in life. Getting a job, driving, just life in general, should follow this principle. Life is dangerous because there are always risks, but you have to learn how to take the right risks. This phrase holds true for everything, and that's why I chose this quote as my litspiration challenge. I had 5 candidates that I chose from, and it took quite a while to decide. This quote's meaning, its theme, is also very deep for me. In many incidences in my life so far, I have taken risks, but many times I failed. I feel that everyone could learn from this phrase, and that everyone should have it as a principle to live by.
Posted by Tong at 19:19 No comments: